Fighting for the Schools Our Students Deserve 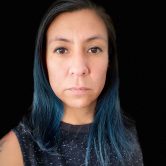 Before committing to a career in organized labor, alma was a Special Education Paraeducator in a small school district in L.A. County. She also worked for a non-profit organization where she helped develop and later directed a literacy program for middle school youth in various LAUSD schools. Around that time, she was involved in a community organizing campaign that brought together many of L.A.’s social justice organizations.  This is where she came in contact with UNITE HERE Local 11, who encouraged her to become a union organizer.  alma spent four years with UH-Local 11, working on numerous campaigns throughout the country: Reno, NV; Phoenix, AZ; Boston, MA; and Houston, TX. She then returned to California and became an organizer with CFT — working on early education, K-8, and higher ed organizing projects. This is how she found her way to UESF, and has been contributing to UESF’s organizing program. alma loves exploring the City by foot, and has taken well to its hills and fog.